The RCB Library is pleased to report that the historical diocesan archive for Tuam, Killala and Achonry has been arranged and listed, and the detailed catalogue has been published online for public perusal in conjunction with June’s Archive of the Month. When the Library reopens to the public, the collection will become available for researchers, and it is likely to be of considerable interest. In the meantime, the 66–page catalogue should provide much to consider. 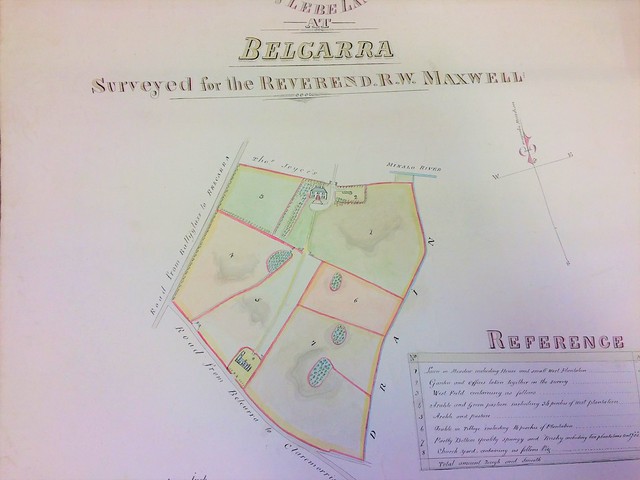 The project marks the culmination of a long process to make accessible the collection as a whole.

Going back to mid–1980s, papers and volumes from the united diocese were gradually transferred from local diocesan custody into the Library which is the Church’s record repository. Many will be aware that along with most of the records of the Irish dioceses up to and including the 1860s, the bulk of the collection which had been transferred to the Public Record Office of Ireland, was destroyed by fire during the Civil War in 1922. Thus, what survives is largely from the middle of the 19th century onwards, but with important pre–1860s survivals that provide a new and valuable body of evidence about how diocesan registries and their registrars conducted their business during the 18th and 19th centuries.

Following the appointment of Dr Raymond Refaussé as the Church’s first Archivist in 1984, the diocese was authorised to transfer the first large tranche of diocesan registry materials to the Library at that time, on the recommendation of the Very Revd W.J. Grant (1929–2009) who was Dean of Tuam and Rector of Cong (1981–1993), and also served as Archdeacon of the diocese from 1980. Dean Grant was encouraged and assisted by Mrs Brigid Clesham, a professional archivist based in Cong, whose interventions at local level helped to put some shape on a large and by then unwieldly accumulation of records and for making early lists and overseeing the safe transfer of several collections of the diocesan records between 1985 and 2000.

With each new cache of papers from a different location, the job of grouping and listing the records became more complicated and needed focused archival attention. Now, thanks to support from central Church funds, the Library has been enabled to engage the services of professional archival company Arcline to systematically arrange the collection and build up a comprehensive picture of the record–keeping and archiving requirements of the diocese. Two Arcline archivists, Alicia Cooney followed by Ciara Daly, carried out this work from June 2019 and again in early 2020. They were supervised by the Librarian and Archivist, Dr Susan Hood, who also completed the work on the Killala and Achonry part of the collection. The work was further enhanced by a specific project to catalogue the maps and plans (D5/17) undertaken by Bryan Whelan, Assistant Librarian.

Thus spanning the course of 35 years, and involving several generations of professional archivists and librarians, the work truly been a team effort to at last share the detailed catalogue list that has been long–awaited by the wider research community.

The detailed catalogue list is available as the Archive of the Month. Just copy and paste the link below into your search bar.

Any cookies that may not be particularly necessary for the website to function and is used specifically to collect user personal data via analytics, ads, other embedded contents are termed as non-necessary cookies. It is mandatory to procure user consent prior to running these cookies on your website.